Metatrader trailing stop expert advisor that can trail the price of the winning trade(s) by either pips, candles, ATR, PSAR, moving average, fractals indicator or percentage.

Trailing Stop main functions
- Trail the price of an opened trade or more by using a multitude of options, such as trail by ATR, PSAR or fractals indicators, trail by candlestick (chandelier), points and so on
- Monitor the profit and start trailing from profit breakeven, or right away

This Trailing Stop EA for MT4 has been created to help traders manage winning trades and baskets of trades, by trailing the price once it goes in the trader’s favor. The main idea that led to this auto Trailing Stop EA was that many traders are not so good at managing winning trades. Even with the bestforex trading strategy, if trade management is done wrong, it can turn a win into a loss. While sooner or later every good trader learns how to spot the trend, when to enter a trade, what forex news to trade and all the other forex secrets, many traders are closing their trades when they shouldn’t. 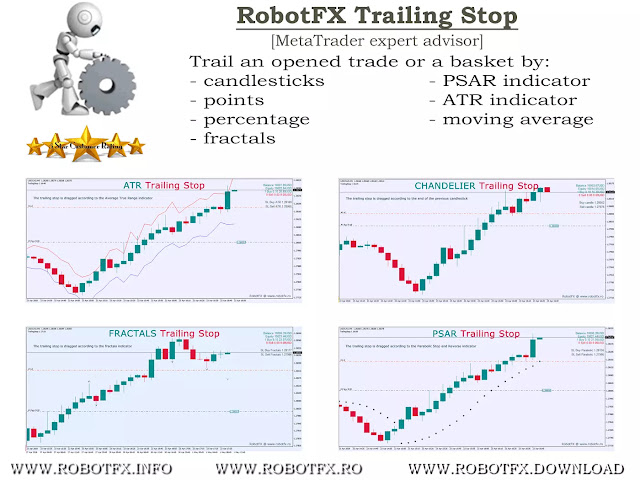 It often happens that traders get too greedy or too scared and so they poorly manage an opened trade. Unfortunately, managing an opened trade is much harder than opening a trade. When this happens, the winning trade is usually closed:
- Too late, after the profit decreased considerably or even became negative profit (loss)
- Too early, before the trade’s profit will reach its highest amount possible


Using the RobotFX Trailing Stop expert advisor for Metatrader, traders can cash in safer without having to continuously monitor their trades.

So the purpose of the Trailing Stop EA is to eliminate those frustrating situations when you close a trade earlier than you should and the price continues to go in your favor, or when you wait for to long and the price reverses, so your winning trade becomes a losing trade.
The expert advisor trails the price using various methods: - After a number of pips or points (the classic trailing method)
- At the last candlestick’s end (+ a buffer in points) - chandelier trailing stop ea
- Trails using Metatrader’s indicators: MA (moving average trailing stop EA), parabolic stop and reverse (PSAR trailing stop EA), fractals, average true range (ATR trailing stop EA)
- Trails using a percentage of the profit

Watch how the RobotFX Trailing Stop works
Buy NOW and benefit of one time payment, no monthly fees, full lifetime license & free updates
Pay 98$ for this product or download a free version to trade on demo accounts from here.